about usStrengthened Research on Healthcare in Laos
Introduction to Our Activities


Research on enhancing the prevention of nosocomial infections at major hospitals in Laos, which was established by Department of Fundamental Nursing Professor Kakinohana, has been expanded, and joint research was begun in August 2015 between the Nursing Department of the University of Health Science and the School of Health Sciences in the Faculty of Medicine at the University of the Ryukyus. This international joint research, which will cooperate on medical examinations and nursing, is expected to produce good results. Under Graduate School Dean Fukushima, the departments of Microbiology, Fundamental Nursing, Molecular Genetics, Hemoto-immunology, Global Health and the Center of Molecular Biosciences will cooperate, bringing to bear the strength of this lateral partnership to enhance the work conducted.
Overview of Research
Okinawa, which opens geographically to the south, requires a global response to infectious diseases spreading across borders, including the invasion of pathogenic microbes from Southeast Asian countries where such diseases are prevalent. This project utilizes research results from previous joint research projects on infectious disease controls and applies the model of the Sethathirath Hospital, a major hospital in Laos, to (1) conduct feasibility assessments on establishing teams comprised of physicians, nurses, laboratory technicians and others to control nosocomial infections, and (2) analyze the bacteriological properties of nosocomial infectious causes (MRSA and other drug-resistant bacteria). The aims are to promote the establishment a network of hospitals in Laos to counter nosocomial infections, and construct an infectious disease control organization that covers the entire island region extending throughout East Asia and Southeast Asia. 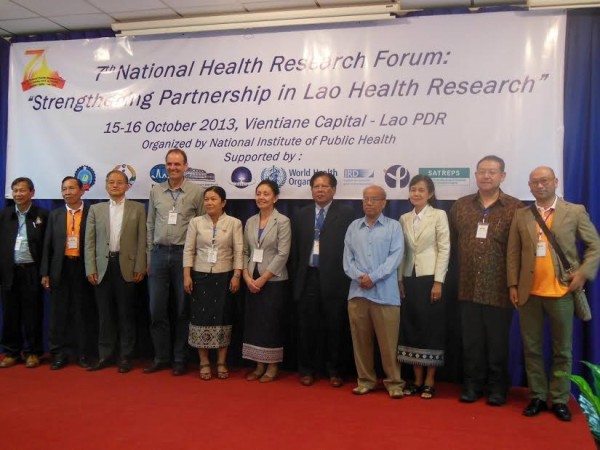 Department of Global Health serves as the secretariat for the Laos Health Research Consortium. The Consortium was founded in 2003 by Japanese researchers and practioners desiring to improve the health of Laotians. The Consortium has over 50 members, among which are medical professionals, medical policy advisers and researchers in a variety of areas. In order to enhance the quality of research in Laos, the Laos Health Research Consortium has formed liaisons and exchanged information with partners in France, Germany, Britain, Thailand, Japan and other countries, and it facilitates the training of research personnel in both Laos and Japan. Annually since 2007, it has provided support for and produced results through the National Health Research Forum at the National Institute of Public Health in Laos.
Link＜http://lao.okinawaghealth.com/＞

Research on Malaria Controls in Laos

For nearly 20 years since 1995, research on malaria control in Laos has been conducted. In the initial stage, vector mosquitoes, human behavioral modes and the state of malarial infections were defined and successful results achieved with the early introduction of malaria control measures employing long-lasting insecticidal nets (LLIN). In 2000, the Laotian government presented the Third Class Labor Order for the successes achieved. Thereafter, sociological research on malaria controls has been developed and expanded not only in Laos, but also Thailand, Ghana, Niger and other countries. This work brought to light the importance of the role of the private sector, such as shops and pharmacies, in the early treatment of malaria in Laos. This subsequently developed into a strategy adopted throughout Southeast Asia and known as the Public Private Mix. Also, malaria controls and comprehensive school health strategies were combined to formulate the School Health Based Malaria Control Strategy, which stresses malaria education. Results have been demonstrated in Thailand, Laos and Ghana, which have led to expansion of this strategy to other countries around the world. In July 2014, the Japan Science and Technology Agency started a Science and Technology Research Partnership for Sustainable Development (SATREPS) with its counterpart the Pasteur Institute, which is under the auspices of Ministry of Health in Laos. This is a major research project on malaria control that will be conducted over a period of five years and brings together laboratory and field aspects. The Department of Global Health has put to use its previous experience conducting research on malaria controls in Laos to undertake sociological and epidemiological research, playing the role of connecting laboratory and field. 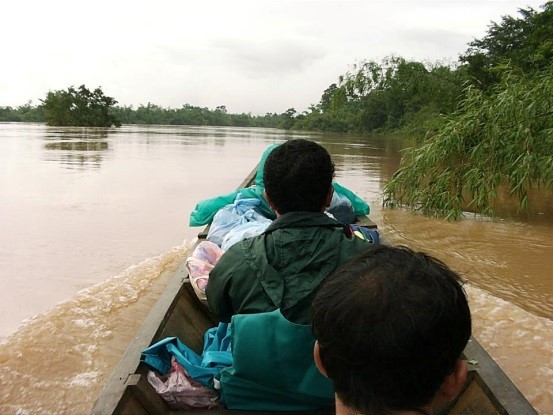 Access to remote parts of malaria affected areas is gained over waterways in regions where roads have yet to be developed. 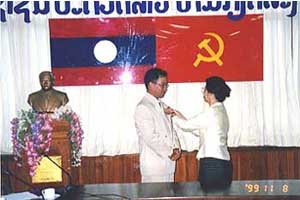 Professor Kobayashi receives the Third Class Labor Order from the Laotian government in 1999 for his contributions in controlling malaria.

Research on community health has been conducted that is based in the pilot area of the Sepone district of Savannakhet Province, a designated poor rural area in Laos. Concurrently, health services are being provided to residents and community health enhanced with support from the Asia Health and Education Fund (AHEF). This region is inhabited by ethnic minorities, where it is estimated that the mortality rate for children under five is much higher than that for the Lao population. It is a region marked by a unique culture and society. The district lies near the border with Vietnam and it has been 10 years since the Asian Highway went through across the district. In recent years, there has been a pronounced increase in mine development and rubber plantations as well as other industry prompting rapid changes in the work performed by local residents. Mobile telephone connections across the region has strengthened communication between health centers and village health workers selected by residents, which has been successful in dramatically improving reports of vital events and other information. The Department of Global Health is also making an effort to strengthen the training of currently appointed staff at the province health bureau and health centers, and has also been conducting research on health personnel management. Moreover, these experiences are currently being expanded into regional health research on maternal and child health as well as malaria controls. 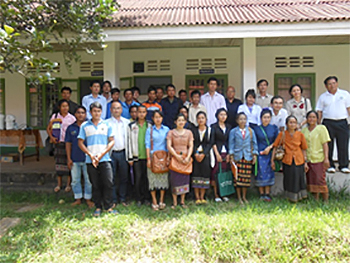 Photo with the staff of the Sepone District Health Center 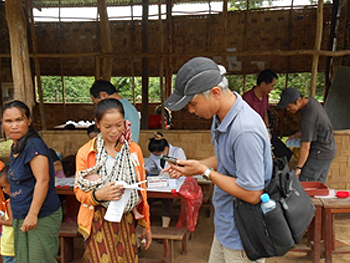 Research on Maternal and Child Health 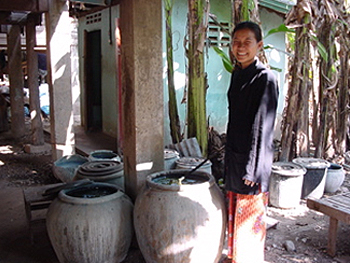 The Department of Global Health is cooperating with the Laos Ministry of Health’s National Institute of Public Health and the Nursing Department of the University of Health Science to commence research on maternal and child health. Mountain tribes account for 75% of residents in the Sepone District of Savannakhet Province. Also, compared to other regions, the percentage of male health volunteers in villages is much higher, giving this region a strong social and cultural influence with regard to gender. In Laos where there is currently a high rate of mortality among expectant and nursing mothers as well as children under five, improvement of health services for mothers and children is a pressing issue, so the Department is planning to pursue research that focuses not only on care right around the time of childbirth, but also broadens the perspective to consider the times before and after delivery as well as participatory learning for women themselves.

Professor Kobayashi serves as the Laos director on the board of the Asia Health and Education Fund.

The Fund’s activities are administered to contribute to self-sustaining development of health and education for people by providing the cooperation and advice necessary for training personnel engaged principally in health, hygiene, nursing and medicine through the provision of educational funds, money for training current personnel and funds necessary for development of the educational infrastructure, including medical facilities and schools under a partnership with administrative institutions and other organizations. These activities are based on field research in Asian regions where people require assistance.